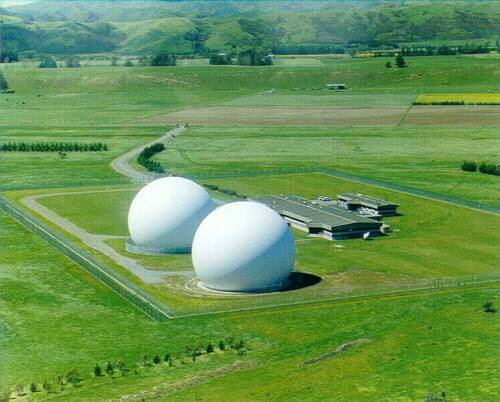 The Waihopai spybase was subjected to unprecedented public attention by the March 2010 trial and acquittal of the three Ploughshares peace activists who penetrated its high security in 2008 and deflated one of the two domes concealing its satellite dishes from the NZ public. The Anti-Bases Campaign was happy to support this non-violent direct action anti-war activity, from start to finish.

The public face of New Zealand’s role as an American ally is the NZ military presence in Afghanistan. But New Zealand’s most significant contribution to that, and other American wars, including the one in Iraq, is the Waihopai electronic intelligence gathering base, located in the Waihopai Valley, near Blenheim. It is controlled by the US, with New Zealand (including Parliament and the Prime Minister) having little or no idea what goes on there, let alone any control.

First announced in 1987, Waihopai is operated by New Zealand’s Government Communications Security Bureau (GCSB) in the interests of the foreign Powers grouped together in the super-secret UKUSA Agreement (which shares global electronic and signals intelligence among the intelligence agencies of the US, UK, Canada, Australia and NZ). Its two satellite interception dishes intercept a huge volume of civilian telephone calls, telexes, faxes, e-mail and computer data communications. It spies on our Asia/Pacific neighbours, and forwards the material on to the major partners in the UKUSA Agreement, specifically the US National Security Agency (NSA). Its targets are international civilian communications involving New Zealanders, including the interception of international phone calls.  Post- 9/11 the GCSB and Waihopai now spy further afield, to those regions where the US is waging wars. The codename for this – Echelon – has become notorious worldwide as the vast scope of its spying has become public.  New Zealand is an integral, albeit junior part of a global spying network, a network that is ultimately accountable only to its own constituent agencies, not governments, not citizens.

Join us for the weekend of anti-war protest at this spybase. Come prepared for roughing it and camping out.  We provide the food (we cater for vegetarians but vegans will have to bring their own).  Bring sleeping bag, groundsheet, a tent, torch, water bottle, eating utensils, clothing for all weather, and $40 (or $20 unwaged) to cover costs.  No open fires.

How to find our camp at Whites Bay: turn off SH1 at Tuamarina (9km north of Blenheim or 20 km south of Picton) and drive to Rarangi on the coast.  Follow the steep Port Underwood Road over the hilltop before descending to the Whites Bay turnoff.  There is a DoC public camp at the bay with basic facilities.  ABC has to pay a fixed charge per head.

This will be the first Waihopai spybase protest since the Domebusters’ acquittal on all charges arising from their courageous citizens’ deflation action.

Waihopai does not operate in the interests of New Zealanders or our neighbours.  Basically it is a foreign spybase on NZ soil and directly involves us in America’s wars.  Waihopai must be closed.

Make all cheques to ABC