By the grace of God, I’m in Rockhampton.

I’ve been a peace activist since I can remember, based almost entirely on instinct and empathy.  The idea of war is repulsive to me.  Its foundations are injustice and inequity.  I was born in 1954, in the shadow of Hiroshima and Nagasaki.  I recall the cold war fear of my formative years.

My guru is Gandhi, with his unflinching appraisal of truth. The little brown man threw off the yoke of British Empire, and inspired a century of astonishing/successful liberation around the world.  Meditating daily on the Sermon on the Mount.  Always asking the question “What can I do?”

In the 1990s it was possible to believe that militarism was on the wane.  With the cold war finished, and nuclear disarmament proceeding among the superpowers, the world could pay more attention to health and sustainable development.  Perhaps even a planetary society.  My son Joseph was born in 1998.

It’s like the world is experiencing a psychotic break.  What to do?

Despite the best efforts of millions of citizens around the world, a new and virulent round of “hot” warfare is escalating across the middle East.  Other conflicts are smouldering.  Israel, Iran, Pakistan, India, the spectre of limited nuclear exchange is back.  So many are living in fear and pain.  The arms dealers and their bankers grow even more impossibly wealthy.

What caught me by surprise was the extent of avoidance and capitulation by the “progressive” population of my homeland.  A few have been compromised by privilege and self-interest, but most have been overwhelmed by a deep sense of powerlessness and hopelessness.

The empire militant, supported so ably by mass media, seems too immense to change.  Folk seem unwilling to believe that change is possible.  Unwilling to risk.  Unwilling to pick up tools of peace.  Unable to face the cost that must be paid.

Since 2001, despair has been hovering.

Throughout the 90s my wife Margaret Pestorius used to tell me that human beings need help to deal with the tribulations of our times.  Specifically she urges spiritual succour and community practice.   Margaret returned to the Catholic Church, and studied liturgy and Christology, in addition to her ongoing nonviolence activism.

Since 2003, after the flouting and routing of what we might call the sentimental peace movement in Australia [those who believed the expression of opinion alone is sufficient to change the political structures of greed and violence] I’ve tried to deepen my understanding of the contemporary problem, and to figure out the best and most effective contribution I can make to turning this boat around.

In 2005 I found myself on the fringes of the Catholic Worker movement, via the Dowling/Rampa family, when a small group calling itself Christians Against ALL Terrorism carried out a “citizens inspection” of Pine Gap (US run spy base in central Australia).  Pine Gap is used for the wars in Iraq, Afghanistan, middle east. Indian Ocean and  Asia – us electronics and cameras to acquire targeting intelligence for “smart” bombs and missiles.

On 9 December 2005 four of us broke into the “technical area” of the base.  In doing so we triggered a land-mark trial and appeal over some cold war legislation.  The Australian Parliament subsequently changed the legislation under which we had been charged (and were eventually acquitted) removing what they called a “loophole” (which was actually a principle of law that allowed us to question the purpose of Pine Gap).

As an experiment in truth, the Pine Gap action was very successful, using small numbers at low cost to engage hearts and minds.  I learned a lot.

In 2008 I joined the Catholic communion, and have been exploring that faith, its scriptures and its liturgy as a way of following through on all the things that happened in that desert night outside Alice Springs.

I felt the presence of God that summer night, and I felt the “rightness” of what was unfolding. For seven years since, I’ve been striving to follow through on that experience in making the very best contribution I can to peace.

(Foolish sinner that I am.)

So this week when I moved into a little cottage in Depot Hill, Rockhampton it felt like both a beginning, and an end.

I’m on trial again, this time with Graeme Dunstan.  For an act of disarmament… making flesh the prophecy of Isaiah.

2013 in Rockhampton will see the trial arising out of the “Rocky Tiger Ploughshares” action of 21 July 2011.

Indictments were presented against me in Rockhampton District Court last Monday on two counts of “threatening an aircraft”, and one count of “wilfully damaging” an aircraft.  My friend and co-defendant Graeme Dunstan has been indicted on the wilful damage count.  The aircraft in question is a “Tiger” armed reconnaissance helicopter.  Armed with a 30mm machine cannon, hellfire missiles, and air to ground HE missiles, the Tiger is a Satanic killing machine.  For a video of the action check out the web site: www.rockytigerploughshares.com.au

www.collateralmurder.com* shows the first really dramatic wikileaks exposure of the “war on terror”.  It shows video captured by the gun-mounted cameras of a US Apache helicopter – killing a bunch of journalists and civilians in Iraq (arising out of habit/inattention/and the wanton disregard of human values).  The Apache is cousin to the Tiger.  They share the machine cannon which does all the killing in collateral murder.    They are both equipped with Hellfire missiles.  The “Tiger” helicopter is a Satanic killing machine.

*(It’s salient to remember that Corporal Bradley Manning, the soldier accused of leaking the collateral murder video amongst a whole bunch of “sensitive” material, has been rotting in solitary confinement for more than two years now and will be standing trial for his life in February 2013.  Julian Assange, who provided the forum for these leaks, has taken refuge in the Ecuadoran Embassy in London to avoid US retribution.  The people who show us what’s going on are under major attack.)

In Talisman Sabre 2011 the Army was evaluating the Tiger to fly combat missions in Afghanistan – the very same kind of ground support mission shown in collateral murder.  Watch that video and tell me why such behaviour ought be allowed.

My entire defence will be that under all the circumstances, disarmament of this aircraft by garden mattock was justified. 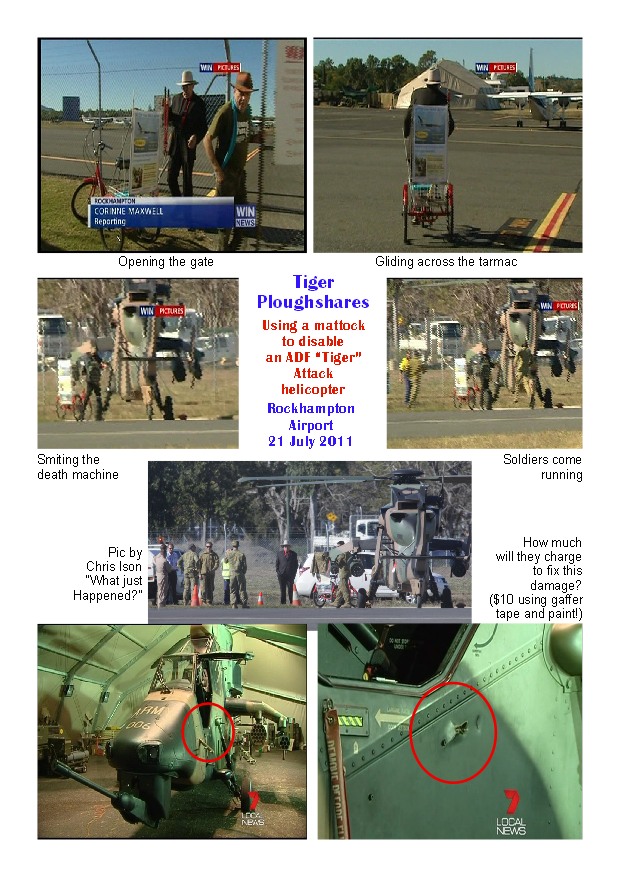 Lawyers tell me the court system will simply not allow most of what I want to say about the helicopter and the war.  So I’m spending time beforehand spreading the information among the interested publics in Rockhampton, and generating discussion about what the war is.  Why it must be ended.

What are the “kill/capture missions” we’ve committed to in Afghanistan for the next decade or more?  Why are we doing this?  How can we stop it?

Personally, my slender hope for acquittal must lie in the popular and growing disgust with this war…. and the growing awareness that government and courts must function properly – for the people and their needs.  People aren’t here to fit in with state violence.  The act of disarmament will have to speak for itself.

If convicted I expect a term of around a year’s imprisonment, which I’ll serve out as a prisoner of conscience.  Each day of custody will become an act of penance and service.

2013 also sees the next instalment of Exercise Talisman Sabre, with thousands of US and Australian assault troops training for murder.

Exercise Talisman Sabre manifests in every way the growing strategic importance of Australia’s military support to the USA.  The bankrupt USA is economising on its bases for global deployment, while increasing the destructive reach of its robots.  Australia has become the world’s cheapest aircraft carrier.  In fact we pay for the privilege of being used.

Australia is available as a training ground for US troops to practice fighting in coalitions under unified command and communications systems.  The war in Afghanistan benefits directly from Exercise Talisman Sabre.  Check out these captures which show the way Talisman sabre is used to train and certify a plug ‘n play amphibious task force so that Australian forces are ready 24/7 to integrate with US invasions of anyone we (or they) don’t like.

During Exercise Talisman Sabre, the machinery of war is on show.

Since 2005 there’s been diverse resistance to Exercise Talisman Sabre.  My contribution in 2013 will be to the public discussion of issues, and the engagement of conscience.  Not only will I advocate for an end to war, but I’ll demonstrate that principled NVDA, including ploughshares actions, are a vital and effective tool in the peace-making kit.

This will happen in the context of a federal election in which the Greens call for immediate withdrawal of all troops from Afghanistan, including special forces.  I believe this is fertile soil.

Two pieces of video are central to the advocacy I plan.

Disabling a Tiger helicopter before it can carry out murder in my name is precisely the kind of act I’m ready and willing to stand trial for.

It’s an act that will sustain me through whatever comes, because it’s an act I am called to do.  Just like Pine Gap.  The act is an offering to the God of love and peace.  The sound of the mattock blade going through the carbon composite of that machine will stay with me forever.  It was a moment of rightness.

“They will beat their swords into ploughshares, and their spears into pruning hooks.  Nation shall not rise up against nation.  Nor shall they study war any more”  Isaiah 2:4

Forrest Gump’s mum says that miracles happen every day.  Margaret taught me that miracles are the evidence of God’s presence on earth.  The miracle of creation is around and in us all the time.

I’m grateful for all that has been given me, this land, this water, this family, this nourishment, this wonder, this love, this joy, this sorrow, this pain.  Given so that we might freely choose the good and share the bounty.

Since 2008 I’ve been following the catholic catechism as best I can through regular worship and communion.  Building up my spiritual muscle.

I’ve learned that taking reflective time to hear the voice and see a path confers many benefits.  Opportunities will come, the right opportunities appearing to solve many problems with ease.  Many streams will flow together, and more opportunities appear.  There will be joy, exhilaration, pain, sacrifice and redemption.

Rocky Tiger Ploughshares seems to fit all those criteria.

So even in the early days of this period in Rockhampton, I’m meeting and remaking the acquaintance and friendship of some of the people here.  Plugging into the local currents.  I’m getting ready for a six month engagement in central Queensland.

My act is still a public story in this town.  Those who remember it seem positive and open to thinking about solutions.  I’ve been to a Remembrance Day ceremony, and a Greens forum at Yeppoon.  The ferment and energy of public affairs in Rockhampton is building.  People are minded to demand solutions.  Good.

2013 looks set to make a difference, and I look forward to playing my role in it.

2 thoughts on “My Foundation”