Exercise Talisman Sabre 2011 will be conducted 11 to 29 July 2011.  There will be a strong peace presence at Rockhampton, Byfield, and Shoalwater Bay.

TS11 will be similar in scale and intensity to Talisman Sabre 2009 and previous Joint exercises with the US since 1999.   TS11 is scheduled to involve up to approximately 30,000 Australian and US personnel, distributed across a number of geographic locations in Australia and the US, as well as at sea and in the air.  Manoeuvring and live firing elements associated with TS11 will be conducted over a two week period from18 to 29 July 2011.

Starting 11 July there’ll be a period for the consolidation and preparation of troops prior to more intensive periods of training.

I am preparing to conduct a ploughshares action at Rockhampton Airport between 18 and 29 July 2011, aimed at disabling a US military helicopter.

Here’s a letter I’ve distributed to DOD, Rockhampton Airport, the Australian, and the Rockhampton Morning Bulletin.

In June or July 2011, at Rockhampton airport, Australia will experience its first nonviolent “Ploughshares Action” aimed at disabling a US military aircraft using garden tools.

Background information on “Ploughshares Action” can be found here: http://en.wikipedia.org/wiki/Plowshares_Movement

The action at Rockhampton airport will take place during Exercise Talisman Sabre 2011 (TS11).  TS11 will involve more than 30,000 US and Australian troops, along with an Aircraft carrier battle Group, an amphibious invasion force, and the full range of military equipment.  TS09 was used to test Unmanned Aerial Vehicles (drones) for urban surveillance and combat purposes, and every TS exercise is used to practice and innovate around joint command of US/Australian combat operations.

The war in Afghanistan has been waged now for more than 9 years without achieving any of its objectives.  Drone attacks against civilians are steadily increasing in number.  The war is spilling across the border into Pakistan.  It is an immoral, corrupt and unwinnable war the majority of Australians disagree with – yet it has bipartisan support in Parliament.

A small number of Christian and Buddhist peace activists are now prepared to take a ploughshares action against US military equipment during TS11, at Rockhampton airport or Shoalwater Bay Military Training Area.  Mattocks, pruning hooks, hammers, and other garden implements will be used to damage the avionics of military aircraft to render them inoperable.

In TS09, there were more than 300 military aircraft movements into Rockhampton during the three weeks of the exercise.

Security at Rockhampton airport is pretty slack, and our target aircraft are frequently parked on a very accessible part of the tarmac (eastern side, adjacent the general aviation area.  See attached image.

Peace activist Bryan Law, 56, from Cairns Peace by Peace, is helping to organise and will be part of the ploughshares action.  Bryan was a member of the “Christians Against ALL Terrorism” group which broke into Pine Gap in 2005, and was one of 11 activists who trespassed into Shoalwater Bay to disrupt the Talisman Sabre exercise in July 2009.

He says “The time to end this war has well and truly passed.  The war in Afghanistan is an offence to Christian morality, and can no longer be tolerated.  TS11 is an integral part of this war, and cannot be allowed to continue unhindered.  I and my colleagues are prepared to risk our lives, and sacrifice our liberty, to oppose, frustrate, and bring to an end Australian participation in this unjust, immoral war”

“We intend to treat all human beings with complete respect, and treat the security forces with honesty and openness in our actions.  Around the world, and at Pine Gap in 2005, security systems have failed to prevent strong action by committed peace workers.  I am confident that we’ll be able to disable a US Marine helicopter if they continue to use the civilian airport at Rockhampton.  If they withdraw from the civilian airport, we’ll address the aircraft at the Samuel Hill military airport in Shoalwater Bay”. 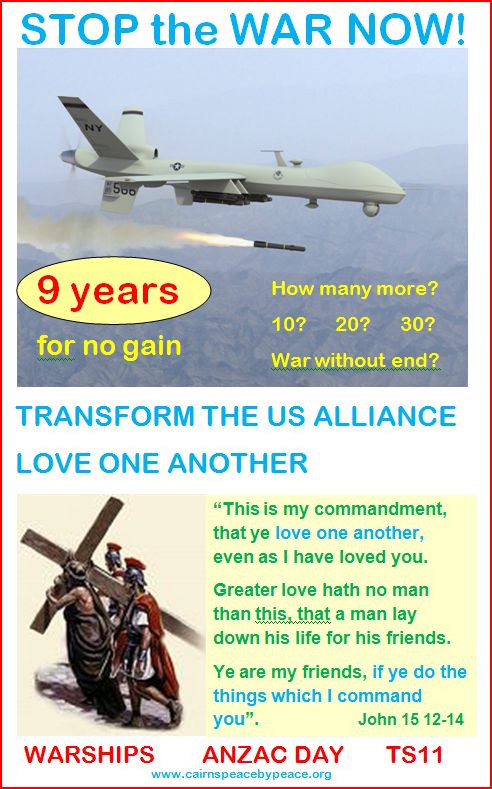