From Graeme, Margaret and Bryan here in beautiful Rockhampton, “Beef Capital of Queensland”.  Joseph is here too, no doubt scratching his head about his parents and their strange annoying ways.  We’ve been getting some time with Joseph during school holidays. You can see some pix of him in his sword warrior guise here: https://www.cairnspeacebypeace.org/?page_id=1092 And one where he’s pretending to like me. 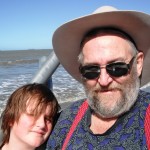 In a few hours, Jim, Culley and Ross arrive at the house, the NAIDOC Mass happens at St Joseph’s Cathedral, and we spend Sunday evening getting ready for the events of the coming week.  When we escalate to civil disobedience.  When a major US military presence hits the streets here.

So this might be the last time in a while I get some quiet space to write up how things are looking so far on the road to Emmaus.

You can find the report I wrote on 20 June here: https://www.cairnspeacebypeace.org/?page_id=956

Since the the public relations narrative has progressed.  The sphere of interest is wider.  I’ve been attacked and belittled by some serious actors (Mayor, Editor of Bulletin). That attack has failed to inflict lasting damage.  The ADF/USA pr unit has cranked up.  We’ve had one very good court/issue victory about the Peaceful Assembly Act 1992.  There’s a Cinderella issue set up with the CEO of Rockhampton Regional Council (evil stepmother) telling me I can’t go to the ball.

Here, briefly, are the relevant updates on the pr narrative we’ve constructed. 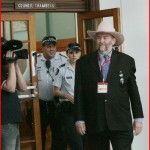 Bulletin has changed gears.  Now their attack has failed, they’re trying not to notice me at all.  They’re not entirely succeeding.  https://www.cairnspeacebypeace.org/?page_id=1106

ABC Radio is in (The free speech/civil liberties action drew them in).  With my court mention on Friday it’s an ongoing story.

7 still the same, may be hostile (highly focussed on the ploughshares).  We’ll see which way they jump this week.  http://www.youtube.com/watch?v=JN7otYFVCvo

Bishop Brian Heenan runs away.  I sent him an open letter, but he dodged me when we both attended a Catholic Peace and Justice do.  https://www.cairnspeacebypeace.org/?page_id=1017

Blogger Petros Khalesirad comes on board.  This guy is great value.  A bit of a dynamo, interested in local politics (participatory, open), a community contributor (youth issues a specialty), and a social media/IT geek.  He’s been giving the issues some attention.  http://www.facebook.com/PetrosK81/posts/237690249582391

4RO gets diverse. Petros has a regular appearance with talk-back dude Michael Baily.  Last Thursday he used the opportunity to defend me (kind of critical support, but OK) and discuss issues.

Murri mob lend approval.  We’ve made the acquaintance of a second mob of murris belonging to land in the ne corner of the military training area.  There was considerable mutual regard, and we’re making the relationship closer.  Margaret has a connection.

The Queensland and WA Greens come on board.  Former Senator Andrew Bartlett has agreed to support Capricornia Greens at the Yeppoon Peace rally on 17 July, and will attend a fund-raising luncheon, maybe on Friday 15.  Former WA Greens Senator Jo vallentine will participate via skype at our 4 July public meeting about the US alliance in Rockhampton 6 pm.  As will Senator Scott Ludlum for ashorter period.

We’re very grateful that Jo and Scott can spare the time for us on what must be a really busy day – the first sitting day of the new Senate, where the Greens now hold the balance of power.  A historic day.

Catholic Worker networks in New Zealand and USA are praying for us. 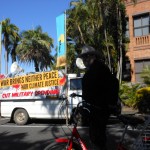 I’m very happy with the way the PR narrative is unfolding.  There have been risks, and I thought it might get difficult when the Morning Bulletin started raising allegations about “bringing down helicopters” and “public nuisance/noise pollution”.

(i)                  Support from respected local residents and journalists who refused to swallow the lies, and stood up for free speech and democracy.  Noel Preston and Petros Khalesirad exemplify.

(ii)                Support from the wider peace network which responded electronically to the Bulletin.  In particular that support turned around a Morning Bulletin Poll that was meant to show all normal people were sick of me.  Instead 50% wanted more of me.  https://www.cairnspeacebypeace.org/?page_id=990

(iii)               The objective conditions were right.  The Peaceful Assembly Act is a powerful piece of legislation protecting democratic rights in Queensland.  Rockhampton Police don’t know much about it, but I do.  I went through all this stuff in Cairns in 2002.  I won there with the assistance of the Hon Peter Applegarth, then QC and now Justice Applegarth of the Queensland Supreme Court.  I was always confident of his advice, and I’m glad to see it still holds true today.

The victory in Court has won me fresh respect from a lot of players and people in Rockhampton.  On Monday i’m going back to the East St Mall where I’m going to use public participation to set sound levels.

At a strategic level I’m really glad to see off the civil liberties hurdle with so little effort.  I remember in 1977/78 when a really vibrant anti-nuclear movement was subsumed by the right to march.  It seems that every effective social movement faces attacks on its right to organise and communicate.  While it’s important to defend ourselves from these attacks, the issue has to be made secondary, and the primary focus remain on the original purpose – “anti-militarism” “hinder talisman Sabre”.