I’m pretty happy with how events are unfolding in Rockhampton.  Graeme is going great with the Byfield/Yeppoon connection.  Most things are going well in Rockhampton.  See this letter for more information..

There’s a spirit afoot (perhaps the Holy Spirit) that’s creating a little vortex of synchronicity and serendipity in Rockhampton.  I was able to show Kerri Duffy and Brian Heenan that John 15: 12-14 – which was the feature of the second reading in Damian’s service – is also the passage of scripture carried all the time by Peace Trike.

Here’s a surveillance picture of Rockhampton Airport, showing a possible path of entry.  I look forward to feeling the spirit move.

It was like having a proper job.  We started on Monday morning.  After a pleasant social weekend, meeting up with five key Capricornian contacts, we had a program to work on with some key dates in place.  Mine is 4 July, and a public meeting (Now at the Fitzroy Motor Boat Club).  Graham has a parade date for Yeppoon, with a supporting program of community banner, flag, and lantern making.

So we did some media work, for which we scored a Rockhampton Morning Bulletin and WIN story on Tuesday.  Both of these were good, positive stories. 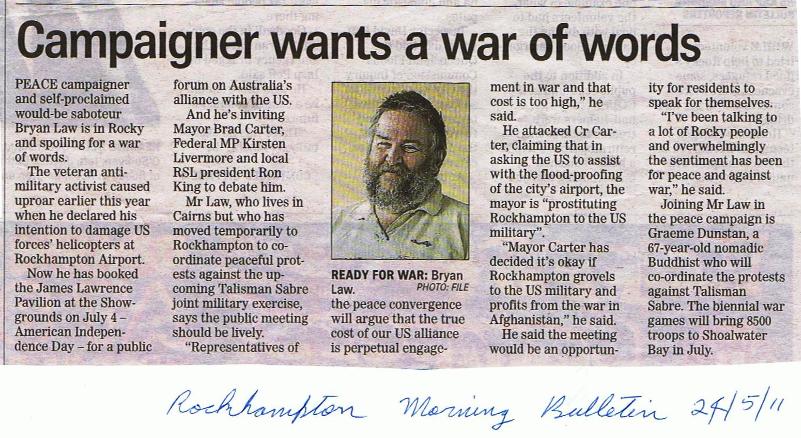 We didn’t see or get to record WIN (we can now), but those who mentioned it to us were favourable.

Today we took our “Bob Katter Peace Show” for an outing to test out various peaces of equipment, and watch how the East St Mall operates.  In reality it used to be a Mall until the Council reopened East Street to vehicles and created what must be one of the ugliest public spaces in this part of the Galaxy.

But there’s a lot of pedestrian and vehicle traffic.  The auto-teller is very popular.  The publican of the Oxford Hotel found our very existance obnoxious and wanted us taken away – so we adopted the Hotel as our sponsor, and gave them littles advertisements as part of the spiel. 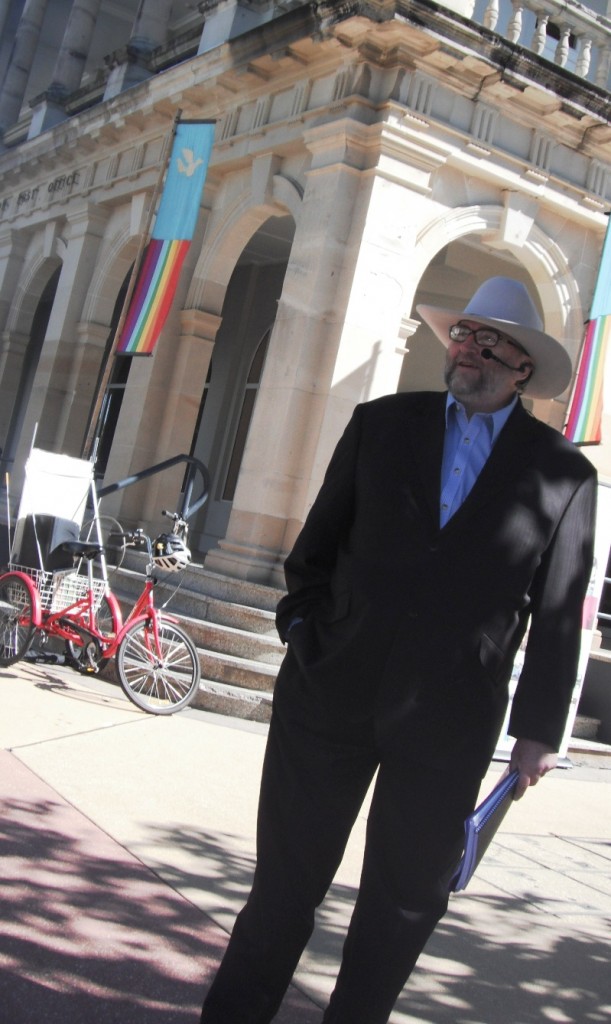 Some people gave a listen.  A few dozen took leaflets.  A whole bunch of drivers and passengers paid fleeting attention.  How fleeting depended on traffic conditions.  East Street is heavily calmed.  Sedated even.

We had some technical issues, which are now hopefully fixed.

My Katter costume got a great reception from Graeme, media, police, and the amorphous general public.  Instantly recognisable, and the right image for this town.  I got heaps of recognition, and a lot of friendly smiles and waves. 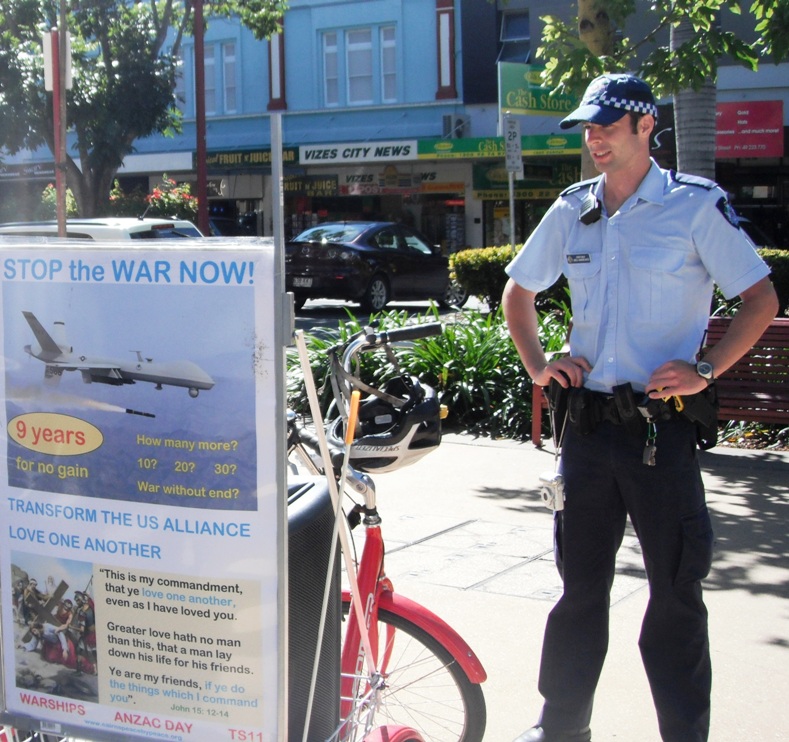 Tonight Jim Dowling and Culley Palmer dropped in to have a yarn and a look around.  They be coming with me in the morning for the Second Katter field test, and maybe do some media.

You can probably tell from the photographs that I’m having heaps of fun.

We’d met a travelling Japanese heritage violinist at the Mall (performing in tuxedo) who helped us out “for peace”, and Graeme remarked to me later on that the presence of serendipity was a sign one is on the right track.  I’ve been noticing a lot of serendipity lately.  The Fitzroy Motor Boat Club is very much in the same spirit as the Cairns Yacht Club, and I can still enjoy a meal there…. for a couple of months anyway.

Here’s side 1 of the standard leaflet I’ll be using until 4 July. 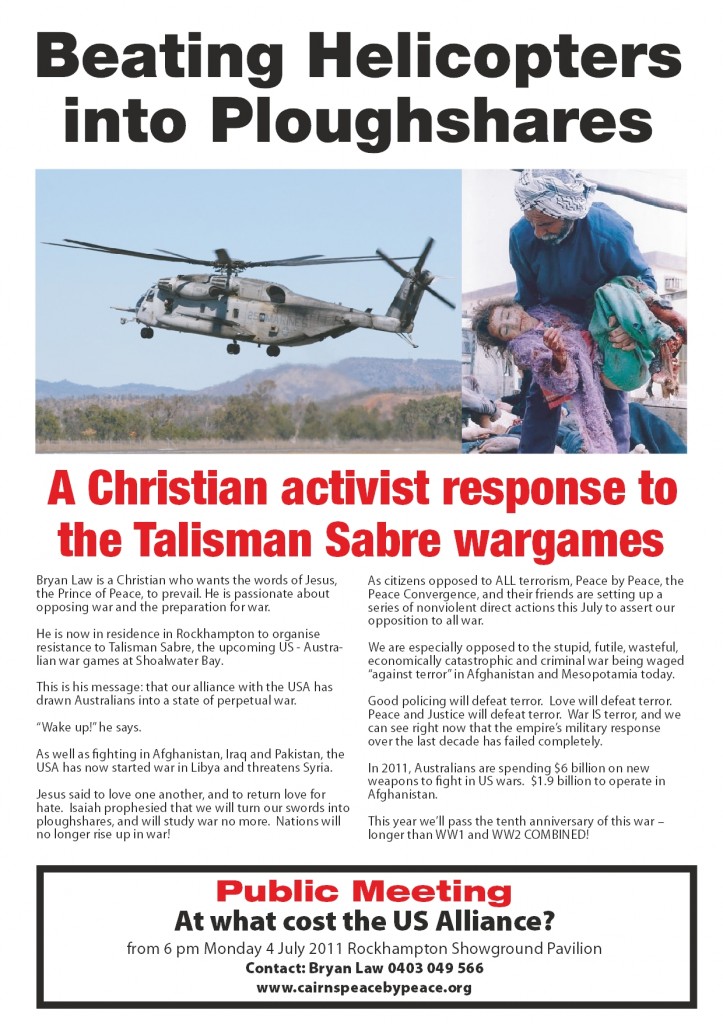 Well here I am in Rockhampton.  Where it’s colder than it was in Cairns.

I’m about to enjoy a winter activist experience.  There is plenty of water through Shoalwater Bay (the exercise area this year is restricted because of it).

I enjoyed the road trip down, and I’ve enjoyed a quiet settling-in process at my new place in Park Avenue (the seedy end).

Meanwhile a  momento of the road trip to what I’m calling Franz Jaegerstaetter House.  A place to experiment with nonviolent direct action in July 2011. 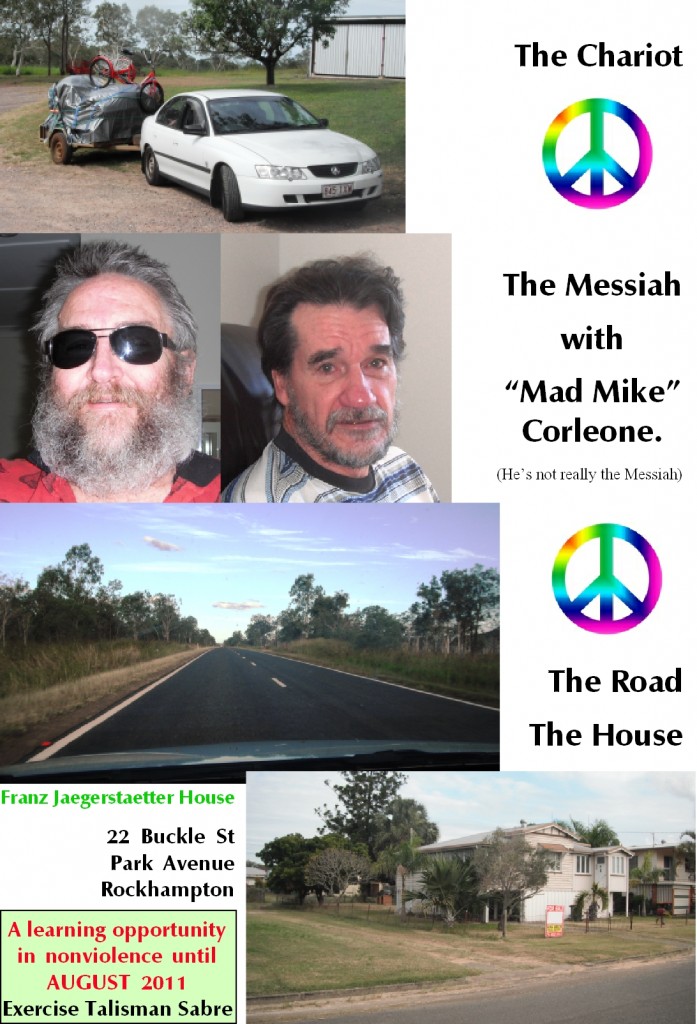 from the eyes of a peace activist

I found plenty of meaning this Easter.

I went to mass on Thursday, Friday and Saturday as we ritually remembered the arrest, execution, and resurrection of Jesus.  I read the part of Pontius Pilate at the Good Friday Mass of perhaps 300 in our local church.  Through the whole proceedings I had this parallel image of Jesus struggling for justice in Roman times, and our good selves struggling for Justice in USA times.

It just seems so obvious to me that the church – “the body of Christ” is called upon now to renounce war, and to put itself on the side of nonviolent love, and yet it struggles with its calling.

Bishop James (who read the part of Jesus in the passion) mentioned in two seperate homilies that in the 2011 calendar, Easter was as late in the year as it possibly could be, so that Easter Monday was also ANZAC Day.  Then he fell silent and had no more to say about it.

So I was happy to receive e-mails about two Catholic Worker actions on Good Friday.  Jim Dowling (above) in Brisbane, and Ciaron O’Reilly (below) in London.

On Easter Sunday in Australia, a network of faith groups started up an ANZAC Eve Peace vigil, using lanterns designed by Graeme Dunstan to commemorate ALL the victims of war as part of ceremonies.  It was appropriate to launch the inaugural event on Easter Sunday.

Here is a pictorial report on the event in Canberra.

Here is a pictorial report on the event in Cairns.

As I move towards a Ploughshares Action in Rockhampton in July, during exercise Talisman-Sabre, I found great meaning in the Easter/ANZAC Day conjunction, and I loved coming across the pictures of activists I’ve known and worked with (some for decades) hard at it – even during the present difficult times for peace activists around the world.

Call me naive and optimistic, but it feels to me that we’re at a cusp, where every impetus towards nonviolence and unarmed love can tip the balance in our sad and sorry world.

The inaugural Anzac Eve Peace Vigil is being held at the Cenotaph this Easter Sunday 24 April 2011.

Bring chairs to sit on, and blankets.

Margaret Pestorius, with her friend Trisha Gates, is planning the ceremony that;

remembers and invites ALL the different peoples, and kinds of people and how they are touched by war

ask “What would the ANZACS say to us about Afghanistan?”

The ceremony will be inclusive, reverant, and offer plenty of opportunities for personal witness or remembrance.

Then we move to thinking about peace, and how to use current circumstances to work effectively for peace.

You can read an opinion column about the event that was published in the Cairns Post today.

A mixed bag of nibbles, nostalgia, and revolution.

(with cash bar, so the revolution won’t go far) 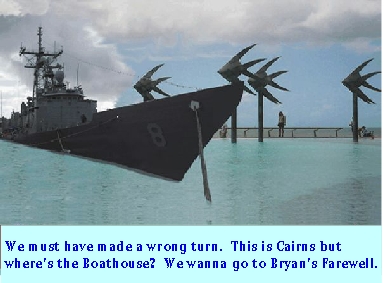 This event is a shared fundraiser between Mike Moore of Cairns Blog (Councillor Alan Blake is suing him for defamation) and Bryan Law (towards the ploughshares action).

Peace by Peace is organising an ANZAC Eve vigil for Easter Sunday.

In conjunction with the australian Quaker Centre, and a peace crew in Canberra, the vigil is going to be lit with candle lanterns.

26 March is also the day on which Earth Hour takes place, so the lanterns we have ready that day will be displayed at a community event in City Place that evening. 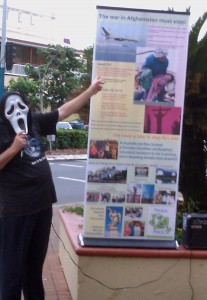