To the House Standing Committee on Economics: 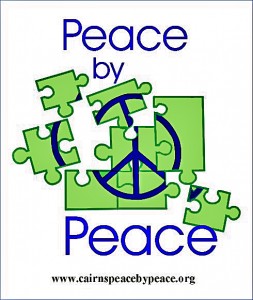 “The call on Commonwealth funds will be at least $5.6 billion.  That is almost 30 times the amount of money in the Premier’s Relief Fund.  That is $5.6 billion that the Australian government needs to find above and beyond our normal expenditure.

Our nation has rarely ever had to outlay such large sums in a peacetime disaster”.

Along with all other Australians, Peace by Peace fully supports the reconstruction of infrastructure post flood, fire, tempest and other natural disasters in Australia.

We assume that reconstruction will take into account the emerging national goals of energy efficiency, sustainability and carbon reduction.  Building resilience into the future.

The purpose of this submission is to recommend that the current reconstruction needs be met from savings in the Defence Budget.

PART A – why fund Disaster Response with the Defence Budget?

1/            Prime Minister Gillard is alive to the severe and threatening nature of Australia’s present situation.  Mainstream science predicts a continuing increase in the frequency and power of destructive weather and terrestrial events.  Events world-wide have been growing in might and destruction over recent years and look set to continue.  In Australia the wide-spread flooding, cyclones, and fire this summer has been extraordinary.

It makes sense to prepare and make resilient Australia’s capacity to endure and recover from natural disaster.

It’s hyperbole to say “Cardwell looks like a war zone” (where were the helicopter gun-ships, the bullets, the bombs, the soldiers and civilians wounded and dying), but there is a quality to natural disaster that leaves the population damaged and bewildered, all their property destroyed, all their rhythms disrupted – just like war does.

The other connection is that the ADF is the biggest, best equipped, and best staffed counter-disaster force in Australia – when called upon.

3/            Finally Prime Minister Gillard made the claim that we are in “peacetime”.  In fact we are bound up in a permanent “war on terror” using military power.

Australia has been fighting in Afghanistan for coming up on 10 years now.   22 brave Australian soldiers have died.

The consequences of this war so far has been to install a Karzai led kleptocracy which includes all the usual drug-running warlords.  The Taliban is alive and kicking.  The war has spread to NW Afghanistan.  There can be no military solution to terror.  War is terror.

4/            Yet the Prime Minister is correct to notice that the international (between nations)situation is peaceful.  There are no foreseeable coherent military threats to Australia in the short or medium term.

We are more likely to become involved in regional conflicts because of our alliance arrangements, particularly with the USA.  Our relations with China are just as important, yet they are stunted, and even brought into conflict, by US policy towards North Korea and Taiwan.

Conclusion of Part A

There is very little chance of military conflict between Australia and other nations. (next 20 years)

There is a very high chance of future natural disaster. (next 20 years)

At the same time we’re desperate for a temporary levy in response to a systemic short-fall in funding for Natural disaster, which is certain to happen.

PART B – why not a temporary levy?

It won’t work and it isn’t necessary.

The issues that need solving lie in how the budget, and government policy, reflect the needs and wants of the Australian people.

Real, regular funding needs to be applied to counter disaster and post-disaster planning and reconstruction.

PART C – what is the best role for ADF?

1/            ADF has always been available to assist in dealing with natural disasters.  Muscle power, logistics, communications, mobility and equipment cab be effectively deployed at relatively short notice.  All Australians are grateful.

2/            My personal experience post Yasi was that ADF could have used more field equipment like chainsaws and trenchers and stuff.  Men with small machines get things done a lot faster than men with shovels.

3/            It’s good sense to improve ADF’s capacity for counter-disaster missions at home and abroad.  Post-disaster reconstruction could be included in ADF’s task and skill sets.

1/            Our present arms acquisitions policies are extravagant and dangerous to our national interests.  Hundreds of Billions of Dollars have been spent or committed or are being considered right now.

Many of the weapons systems being purchased appear primarily designed to participate in combined operations with our allies, most notably the USA.  Interoperability is a key word in contemporary ADF doctrine, and is supported through training and actual field operations like Exercise Talisman Sabre 11.

2/            The key assumption in such defence planning is that the USA, and its other allies, will guarantee Australia’s safety in the event of a military attack by a major power (China, Japan), or by a superior regional power (India).   That has yet to be proven (there are limits to even US military power, and they act primarily in their own interests, not ours). There is no prospect of military attack on Australia for the next twenty or 30 years.

3/            Meanwhile the US alliances puts us in jeopardy, and draws Australia into numerous regional conflicts we might otherwise avoid.  We’re already in Afghanistan, we recently fought in Iraq, we’re preparing for conflict with North Korea and Iran.  It is for conflicts like those we are buying such large quantities of advanced weaponry.

4/            A Joint strike fighter, or an ant-warfare destroyer, or a nuclear powered attack submarine, are absolutely no use to anyone during a natural disaster.

5/            Were Australia to moderate our military alliance with the US, and reduce our availability for regional wars, we could adopt a much more cost-effective strategy of continental defence, including social defence.

Not only would such a programme save scores of billions of dollars, but the resulting ADF could be much more readily optimised for counter and post disaster work.

We can start straight away by defeating this Bill, and enacting new counter disaster legislation along with budgetary adjustment.

PART D  – Can the Australian Parliament rise to the occasion?

1/            The present defence policies of the Australian govern are pointing inexorably to tragedy.

2/            Australia is going to fail in Afghanistan, and will leave that country before this decade is out.

3/            We pray the aggressive brinkmanship being played out in and around North Korea does not lead to nuclear conflagration any time soon.  We pray to avoid war with China.  Any such war will destroy generations of Australian’s work and prosperity, including future generations.

5/            Few Australians have confidence in the Parliament’s ability to find and implement them.