In the immediate aftermath of Exercise Talisman Sabre 11, four longer-term activists were packing, convalescing, reconciling, and generally tidying up after a long and difficult series of peace actions.  Helen Bayes, Margaret Pestorius, Graeme Dunstan and Bryan Law had a series of yarns about what had just happened, prospects, and things we can do which might be useful in making a more effective national peace movement.

The last time these four had been together was in April 2010 at the ”Putting an end to War” workshop  held at Silver Wattle over the ANZAC Day weekend that year.

Out of all this yarning, Helen Bayes, who is the director of the Quaker Centre at silver wattle, suggested a national gathering of nonviolence organisers for 2012, and the rest of us think it’s a good idea.

I feel it’s important to build on success.  Silver Wattle in 2010 was successful because it brought a significant group together, and infused us all with hope for a restoration of peace values to ANZAC Day.  A new public ANZAC liturgy was created and implemented (at least in Canberra and Cairns) and many folk delivered on peace actions around the combined EASTER/ANZAC conjunction.

Likewise Silver Wattle 2010 was successful in networking towards TS11.  Helen was in Rockhampton fulfilling a promise to play a pastoral and restorative role amid the late action debris.  Bryan and Graeme had made a pact to work on ANZAC and Ploughshares projects together.  Margaret took on important networking and organising roles for her Shoalwater Wilderness Pilgrimage.

Simon Moyle from the Swan Island mob likewise drew inspiration and support from the Silver Wattle gathering, where he showed off the campaign to date.  Since then, the Swan Island mob has pioneered the emerging model of nationally dispersed NVDA in response to Exercise Talisman Sabre.  They have a model of training, action, community support and awareness.

There’s been enough development and innovation in Australian nonviolence circles to justify a gathering – just to swap stories, draw lessons, and look for mutual aid opportunities.

There are a few other reasons too.

Objective conditions suggest a tsunami of civil dissent is building against the war in Afghanistan, and against the US alliance/wars in the middle east.

At the same time, our Australian government is making open-ended commitments to function as a garrison/vassal state in service to US foreign policy.

Our duty is to prevail in the contest of public ideas, and to turn nonviolence principle into effective social action. 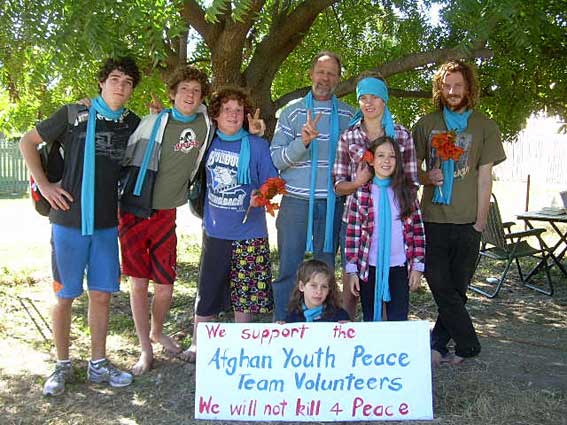 So I’m getting behind Helen Bayes and the Australian Quaker Centre, and supporting the national nonviolence gathering in 2012.

I’m also putting my ideas forward for things to include:

Direct Action. Just down the road from Silver Wattle in rural Bungendore is the Headquarters Joint Operations Command (HQJOC).  This is the ADF nerve centre – where they command operations in Afghanistan and around the world.  Where they take orders from their US delegated commanders.

I reckon we can produce a simple trespass/hinder action one or two days after the gathering.  Participation can be optional.  Folk who want to do civil disobedience ought allocate sufficient time for some court follow-up.  HQJOC is a site crying out for action (security there is much the same quality as security at Rockhampton airport.

Healing and bonding. Some time spent before the gathering by those in need of debriefing, lamenting, repenting and/or emotional restoration.  An opportunity to reconcile personal differences among activists.