Here I am in Rockhampton.  In Depot Hill.  A good old fashioned working class suburb (Rockhampton’s like that).  Beautiful day.  Lots of birdsong.

Tomorrow I fit out Peace Trike with a new display poster (a pale echo of Peace Bus).  The goal is to embed a central concept of rational peace aspirations… that we disconnect from the empire’s military command. 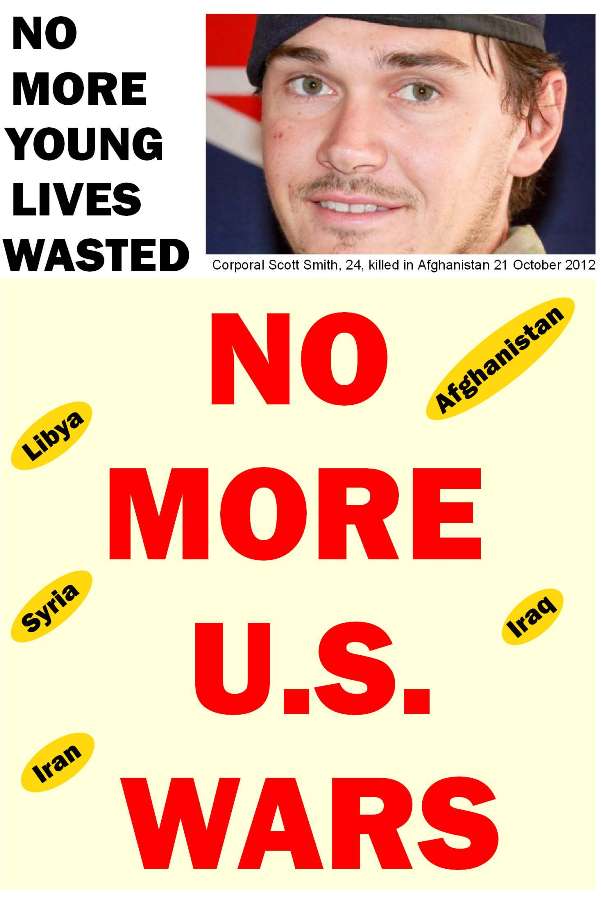 I’m working toward an “Independence from America” declaration on 4 July 2013 – just before TS13 assembles.  Along the way I want discussion around Remembrance Day, ANAZAC Day, and the Coral Sea memorial.  So that by the time of TS13 people are asking “why do we fight around the world for these bullies”?

In a lateline interview in September, Major General Cantwell concludes that the very limited gains in Afghan civil society cannot justify the loss of Australian soldiers:

“EMMA ALBERICI: Major John Cantwell, on Afghanistan you write of being haunted by the lives lost there. The Government for its part says though there’ve been many achievements in Afghanistan – life expectancy up by five years to 48, many more children in schools, the people generally enjoying greater freedoms than they did in 2001. In your view, have those gains at all been worth the painful losses for Australia?

JOHN CANTWELL: Well, I don’t think it does, Emma, to be absolutely honest. I acknowledge all of those things and it’s absolutely true that the extraordinary efforts and courage and endurance of our servicemen and women has produced some very good improvements – from a very low base. Sure, the Afghan life expectancy might’ve improved. It’s still amongst the worst in the world. Sure, the education’s better. It’s still amongst the worst in the world. Women and girls are still deeply disadvantaged, health is appalling, governance is broken. Let’s not delude ourselves we’ve created a Garden of Eden in Afghanistan. It’s never going to happen. But what I would contend is acknowledging all of those – the advances that we’ve made, and they have been made at terrible cost, I would just put the view that for someone like me, who isn’t a politician, who isn’t required to strut the world stage, but was indeed required to look in the eye soldiers who were out on patrol, who were doing the job that they’d been sent to do despite its dangers every day, willingly, bravely, remarkably well, look them in the eye and then perhaps see them, as I did, unfortunately, on a slab in a morgue. And that’s when I asked myself, “Is that life worth it?” And I am of the view that the life of every one of those soldiers and the 10 in particular that I was responsible for is so valuable, you can’t just say, “Oh, and by the way we’ve improved schooling in Uruzgan.” I don’t buy that. The lives are worth more than that. And despite our best efforts, I don’t think it’s justified.”

“I don’t buy that. The lives are worth more than that. And despite our best efforts, I don’t think it’s justified.”

Or Lindsay Tanner, also in September, who said on the 7.30 Report:

“I think it’s difficult to justify Australia continuing to be in Afghanistan. I think there was a legitimate reason for the Coalition forces to go there initially in the wake of the September 11th attacks, but for a whole range of reasons I now think that we perhaps should have got out some time ago. I’d be open to hearing alternative points of view, but I think there is a big question mark there. Ultimately we’re really only there to defend American prestige. That’s a not a trivial thing. American prestige does matter for Australia and its national security interests, but ultimately there is a big question here as to whether it is right and reasonable for young Australians to be dying to defend American prestige.”

Is it right and reasonable for young Australians to be dying to defend American prestige?