Margaret has changed this page: Feb 2014

We can be contacted at 298 Fearnley St Manunda, Cairns

This is where Bryan spend most of the last 15 years of his life.

5 Jane St, Depot Hill – Where Bryan lived at the end: This is what he wrote.

Today I signed a lease and paid my bond/1st rent for a tiny workers cottage at Depot Hill in Rockhampton (right next to the rail yards).  I move in on 30 October.

On Monday 5 November the Commonwealth Director of Public Prosecutions will present indictments against me and Graeme Dunstan at the District Court of Rockhampton.  One more technical step on the path to trial for our Rocky Tiger Ploughshares action we carried out during Exercise Talisman Sabre 2011.

We are charged with doing $200,000 damage to a “Tiger” armed reconnaissance helicopter owned by the Army and being evaluated for duty in Afghanistan at the time.  We explained ourselves well in advance. 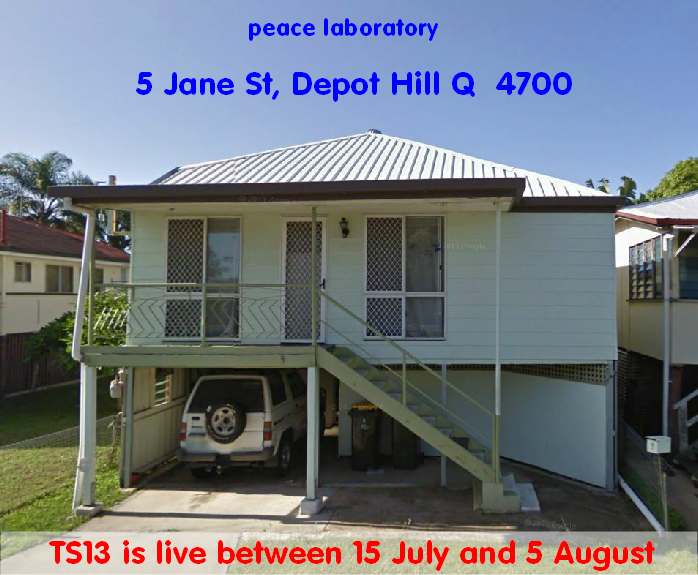 My plan for the next six to nine months involves a little bit of organising in Rockhampton for peace and nonviolence.

Like Australian citizens everywhere, the vast majority of Rockhampton residents are opposed to the bloody quagmire of war in Afghanistan.  We are ashamed of what we did in Libya, and confused about why it’s all happening again in Syria.  We fear the coming (nuclear?) holocaust against Iran.

After 11 years of calculated deception by our leaders the Australian people are sick of war.  We are sick of the political parties that suck up like cowards to US empire, cynically sending our troops to kill, be damaged, and die.

I have been opposing this series of wars since they were begun in 2001.  My son Joseph was then three years old, and is now fully into his teenage years.

Even at a Catholic college, Joseph’s surrounded by militarism (lots of military parents, active recruitment).  He has never known a time free of Australian involvement in aggressive war.  I am painfully aware of the civil and political difficulties that have been faced over all that time by peace activists and organisations.   We are a small and fragmented “movement”.  I try to keep going and be effective according to opportunity and circumstance.

Since 2005 when Christians Against ALL Terrorism conducted a citizens inspection of Pine Gap, I’ve been experimenting with small affinity groups carrying out inspirational NVDA.

My question is how to maximise the impact of actions while being economical in human and material costs.

Along the way, I’ve become Catholic.  That’s taken me on a personal journey, seeking to discern the path to peace, striving to enact Jesus’ commandments (which seem key).  Love God.  Love one another.  Love enemies.  Holding onto that stuff, and figuring how to apply it, seems like a full-time vocation.  It’s led me to here.

The trial in 2013 is my first priority, and the residents of Rockhampton are the primary audience.  I reckon the trial can show Rockhampton folks the extent and nature of the wars they presently consent to and enable.

The “Tiger” helicopter is a work of Satan.  The 70mm machine cannon it sports is the same weapon that we see slaughtering innocents in the Wikileaks “Collateral Murder” video.  When Afghan children are killed collecting firewood, or houses are fired upon for sheltering “insurgents”, it’s often these helicopters doing the murder.  As a Catholic I vow to renounce all the works of Satan.

To fully get this story out during the trial, there’ll have to be preparation of activists and interest groups beforehand.  In particular folk will need to understand the contemporary technology of killing from afar, and the role of Talisman Sabre in waging wars of aggression.

My intentions are to organise among local activists and groups in the Capricorn district in the lead up to winter next year.  I’d like to establish peace events for

4 July Independence from America Day, and

The continuing themes will be questioning the US alliance, and rejecting wars of aggression.

I hope and expect that such a program will lift the spirits of peace and social justice advocates in Rockhampton, inspire creative acts of resistance, and find robust expression in peace activities during Talisman Sabre 2013.

You can help me in this work by donating money to:

All funds will be used organising and promoting peace issues, especially the Rocky Tiger Ploughshares, in Rockhampton and the Capricorn region.

Even better, continue to apply your own efforts – and mutually reinforce all our prospects for peace and justice by organising and supporting events to challenge militarism and the US alliance.

May peace be upon you.