45 years ago, on 4 April 1967, at the riverside church of New York City, the rev Martin Luther King Jr explained his opposition to the war in Vietnam:

War is unjust.  War kills God’s children, exploits the dispossessed, and steals from the poor.  He said:

“I am convinced that if we are to get on the right side of the world revolution, we as a nation must undergo a radical revolution of values. We must rapidly begin the shift from a “thing-oriented” society to a “person-oriented” society.    When machines and computers, profit motives and property rights are considered more important than people, the giant triplets of racism, materialism, and militarism are incapable of being conquered.” 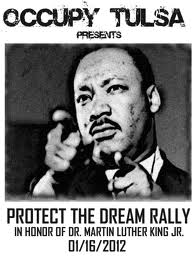 As I look around me in the world today I see those three evil giants at play.  Tearing at the fabric of life.

As a nation in 2012, Australia is being pressed into military service for Washington, the Metropolis of modern war.  Afghanistan, Iraq, Libya, Syria, Iran, (and Israel) constitute the immediate field of operations.  We are becoming embroiled in the South China Sea.  We are on the path to perpetual war.

On 4 April 2012, more than 200 marines from Fox Co, 2nd Batallion, 3rd Marines arrived in Darwin to initiate a new phase of Australian war-making.

Our country is to become both a pivot, and a rear echelon base to project US power via the Indian and Pacific Oceans and into their associated states.  China, India, middle east, se Asia.

Darwin, Perth, and Rockhampton are to become garrison cities for the US Empire, training and deploying forces as circumstances arise.  HQJOC at Bungendore is the seat of joint command.  Pine Gap outside Alice Springs remains the centre of space-based intelligence.  Swan Island trains special forces.

These are six key sites through which we can address Australian support of US war-making.

Among other goals, the 2010 letter gives attention to Exercise Talisman Sabre, calling for:

“A recurring “Shoalwater Wilderness Pilgrimage”, containing and reflecting Christian Civil Disobedience to be developed and publicised for Exercise Talisman Sabre 2011, and subsequently;”  tick

Rockhampton is one of the six national sites.  Since P@E2W-2010, I’ve had two years of mostly good fun putting together a set of activities and events in Rockhampton over winter 2011, culminating in the Rocky Tiger Ploughshares action of July 21.   tick    This was a peak action for me, with fabulous engagement from Graeme Dunstan and Margaret Pestorius.

Margaret Pestorius also got to run a wilderness pilgrimage like she wanted.  Helen Bayes from Silver Wattle gave some spiritual guidance and after care to all remaining.  Graeme made a major effort facilitating traditional “convergence” activities and coordinating with Darrumbal.  All consistent with the goals chosen in P@E2W-2010.

So I’m interested in extending the lessons and responses from Exercise Talisman Sabre, yet it’s only one of five goals we talked about in 2010.  There has been progress on quite a few.

Simon Moyle and Jessica Morrison lead a continuing experiment at the Swan Island SAS facility.  That group ran a one week parallel event in July 2011 and is planning further events in 2012.  tick

Over two years, we’ve experimented in the Gandhian manner at putting an end to war.  We’ve all got stuff to share, learn, and plan around using in future experiments.

So as I head to Bungendore to hang out for a week with friends, including Margaret, Graeme, David Johnson, Jo Valentine, Jessica Morrison, and a dozen other faith-based peacemakers I’m thinking it will be an uplifting sort of gathering, from which we might facilitate some continuing good results.

For those who would conquer the evil giant of militarism, one task is clear.

Australia must be brought to withdraw its cooperation with US war-making.

Australian citizens must stop our own country from fighting in US initiated wars, and we must stop aiding and abetting the US in making those wars.

So how exactly do we do that? 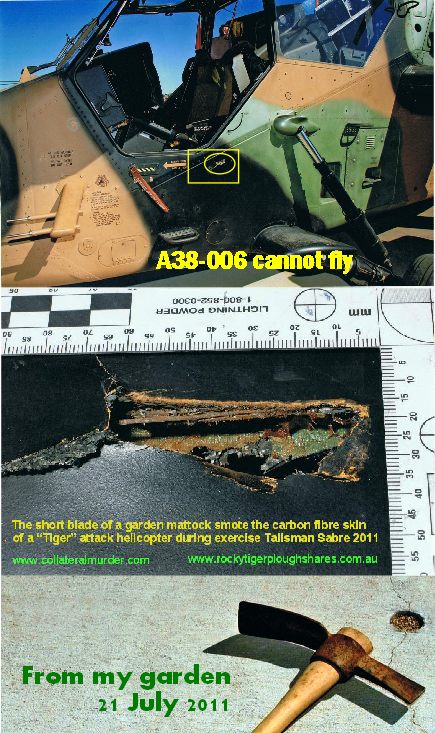 I’m not completely sure, but I strongly believe that ploughshares actions and their equivalent have a role to play.

My best hope lies in the ongoing impact of the Peace Preacher and Ploughshares campaign in Rockhampton in 2011.

This radical action of direct disarmament by mattock was pretty well received by many of the various publics in Rockhampton.  The majority of folk I spoke with about it afterward (mostly in the Hospital) were more concerned about the failure/lies of the Defence establishment that the ploughshares action disclosed (and the war in Afghanistan) than they were about the civil disobedience itself….  which they had been expecting.

I cannot over-stress the importance of advance notice of intentions.  It has proven a crucial means of projecting integrity and initiating public debate.  It was featured as prosecution evidence in our Pine Gap trial.  It will feature as defence evidence in the forthcoming ploughshares trial.

Likewise important is the need to physically disrupt the “business as usual” of the military machine.  There’s something metaphysical, something more than real, in the moment when the machine stops, pauses, and has to reset.  I believe very strongly that we must continue to develop our capacity to make such moments happen, and to hold them out as an example of what every citizen can do in the event of failure by government to cease making war.

A large majority of Australians oppose the war in Afghanistan and fighting for the USA.  How are we doing so poorly at PR?

I think the circumstances are such today that P@E2w-2012 is a timely opportunity to improve and render more effective the widespread sentiment for peace.   I’m looking forward to hearing and thinking with others about steps we might take.  Among other things I’d like to think about using the upcoming ploughshares trial to best effect.

Underpinning the pragmatic and tactical aspects of our gathering lies the spiritual practice of revering God.   Of living out our vocation, whether that is a discipleship to Jesus, the enactment of Buddhist teachings, or adherence to satyagraha.  The gathering will be a time to count our blessings and rededicate our lives to the good.