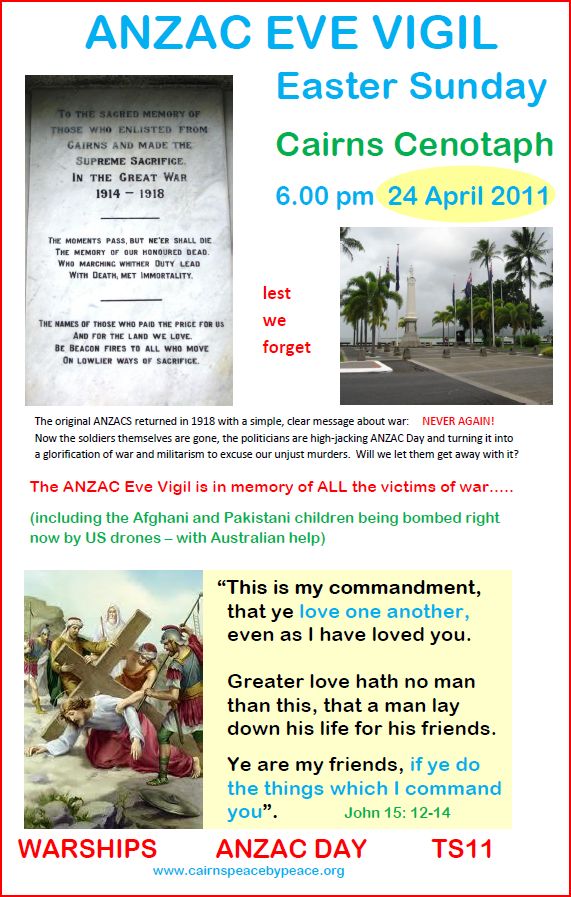 As a people we commemorate the courage and sacrifice of our soldiers in WW1.  Those soldiers who returned spoke movingly about the horror and futility of war.  Against the hopes and dreams of the ANZAC veterans, Australia is now in a state of perpetual war.

The war in Afghanistan is against tribal peoples on the other side of the Earth.  We have never been attacked or hurt by these people, yet we are using all our technology and skills to bomb and kill them.  Why?

We are at war because of our military alliance with the USA.  We hope this alliance will protect us from “enemies” who might emerge and threaten us in future.  No other nation on the planet threatens us now.  Are we cowards?

There can be no military victory over terrorism.  Indeed war inflicts terror, and escalates a political problem into crisis.  Terrorism is criminal behaviour, and the best response is effective policing.  Indonesian and Australian police brought justice to the Bali bombers.  Military action in Afghanistan has only made matters worse.  2011 will see the 10th anniversary of this futile, brutal war.

Our politicians use occasions like ANZAC Day to hide behind the valour of our soldiers.  Those who speechify from the podium talk about the sacrifice of soldiers without ever explaining why we’re at war, why it’s failing, or how we’re going to end it.  Politicians do not go to war.  They send others.

Jesus commanded us to “love one another”, to love our enemies, and to sacrifice ourselves rather than to kill.  Christ died for us in the most painful and humiliating way so that we might be forgiven our sins and go on to the Kingdom of God.

The RSL (a political organisation) has perverted the message of Christ, and misused John 15:13 to suggest that any soldier who dies in war is following the commandment of Jesus.

Would Jesus bomb the children of Afghanistan or Pakistan?

Would Jesus take up arms against anyone?

Or would Jesus manifest the love of God for all people through a nonviolent struggle for peace and justice?