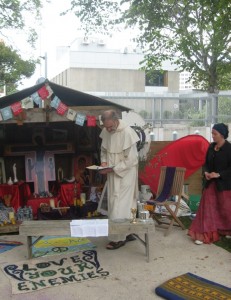 Prayer on the path to peace.

As the Waihopai Ploughshares head to trial tomorrow one of the defendents, Fr Peter Murnane, officiated at Mass this morning at the shrine outside the US Embassy.  About 40 came to worship and make communion with the body of Christ.

In his homily, Peter reflected on the nature of peace, and how it rests on the principles of repentance for wrongdoing, forgiveness of sin, and love for God and each other.  He drew attention to the Embassy and how the people living and working in it were in a state of constant fear- as shown by the weapons, defences and architecture of a building in the otherwise sweet sunshine and clear air of a beautiful Wellington day.

He contrasted that with the trees, grass, and living nature of the park in which God’s presence burned everywhere with green fire, and where we gathered to give thanks and praise.  He reminded us that God was also present in the hearts of those who worked for empire, and that our work as peace-makers was one of transformation rather than condemnation.

So that while we might work to stop the military machine, and stop the bad behaviour of empire, the key aspect of our work was transformational as we called on God to restore the joy and clean hearts of all the Embassy personel, of ourselves, and of each other.

Then we made communion and prayed.

It was one of those moments of privilege that I get to enjoy so often now in the company of those who live and work for peace and justice, and I gave thanks for being given life and the opportunity to be here witnessing for this trial.

The shrine at Katherine Mansfield Park is becoming stronger and more vibrant day by day.

In the afternoon 70 people went on a peace walk through central Wellington, observing stations of the cross at sites of cultural significance born out of the traditions of peace found here.  Among the sites they visited were the Parihaka memorial, the Gandhi statue, the Kate Shepherd Suffragette Garden, and the Wellington nuclear free sign – all of which commemorate significant victories and ongoing peace work from Maori, Pakeha and global cultures.

At five we gathered again at the shrine to hear from 4 people about their stories, aspirations and struggles as they work for peace, and to share ideas and feelings about how we strengthen our movement and achieve our goals.  There were many moving moments as people young and old, male and female, new and experienced revealed themselves in all their humanity as they grappled for a way forward – in a society in which so many have lost their way, or settled for second best.

Now we’ve dispersed for the evening.  The three defendents are closetted with their legal team, doing final prep for tomorrow.  Ciaron O’Reilly is celebrating his 50th birthday, folks are drinking stimulants, caring for children, yarning with each other, and getting ready for the week ahead.

I’m blogging and getting some powerpoint presentations together about the last 7 years of the successful NVDA I’ve been involved with, which I’ll show in odd moments at Emmaus House, and at the public meeting on Wednesday night.

2 thoughts on “Mass for Waihopai/Ploughshares”