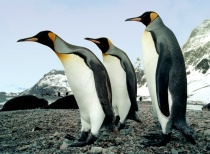 A bunch of us has met twice now, and we’ve talked about how to stop US warships from visiting Cairns.

Margaret, Steve, Rob, Mike, Paul, and I have made decisions about the what, how and who of taking effective action.   Trish, Sarah, Polly, Carla, Jonathon and Stu will join in the training, and the support/action.  We are going to make the US Navy’s job a lot harder every time they come to Cairns.

We’re meeting again on 3 March to move the costumes forward (penguin/stinger suits), and decide on a training program and public launch.

We have three swimmers, a media guru, a techno-geek, a community artist, and a bunch of otherwise ordinary folk willing to witness, support and organise.  We’ll take dramatic and effective NVDA every time a US warship arrives.  We’ll use that NVDA to spread the word and build the movement. 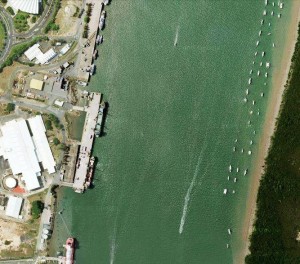 Our action will be to swim out in front of arriving US warships – to make them stop and wait while Queensland water Police clear us out of the way.  With three swimmers, all of whom will non-cooperate (and two of whom will be fit), it ought take Police an hour or more to do that job.  For that hour, the US Navy ship will be vulnerable.  Under tow in a foreign civilian port.

A big and important warship – like the USS Blue Ridge – might be kept vulnerable for several hours.

If we can achieve these modest goals the US Navy will stop coming to Cairns.

Penguins for Peace grows out of eight years work by local group, Peace by Peace, and draws on a tradition of peace work in Australia and New Zealand by the Peace and Environment Fleet, Paddlers for Peace, and others who’ve addressed warship visits.  Hat-tip here to Cairns Blog which recently published (with permission from Fairfax Media) an image of NSW Greens parliamentarian Ian Cohen holding onto the bow of a US warship coming into Sydney Harbour, check it out!

Peace by Peace had a web-site up documenting this first phase of the warship campaign in Cairns, but current changes have left those pages off-line for a while.  I’ll put a photo gallery up, and you will see the first phase was based around the idea of citizens inspecting the US warships for weapons of mass destruction (the US military is one gigantic weapon of mass destruction, and almost constantly in use).  Queensland Police provide the US Navy “security” from any scrutiny by citizens.

Penguins for peace is a second phase using the vulnerability and difficulty in handling unarmed human beings in Trinity Inlet – to make the US Navy itself feel vulnerable.  There are greater risks involved, and a higher level of commitment needed by activists and their supporters.

I’m really glad to see a dozen people committed at this early stage to making it happen.  I’m looking forward to seeing it, and reporting on it.  I predict with confidence that the Penguins for Peace program will succeed.  Cairns may never see the USS Blue Ridge again!